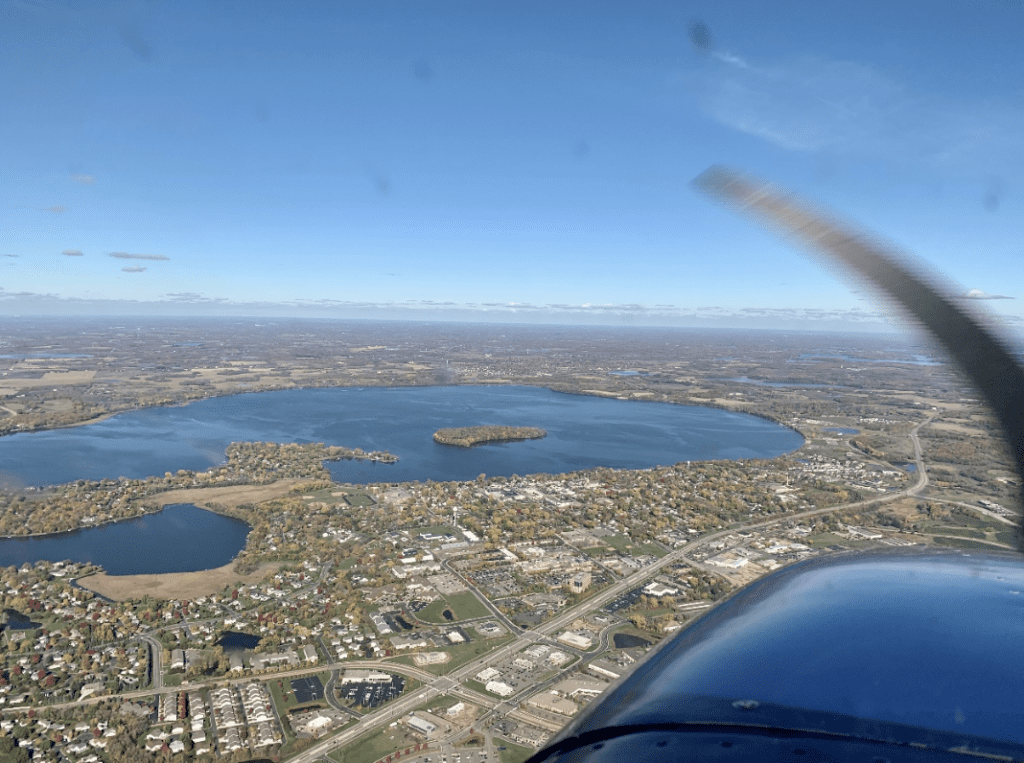 My checkride date is rapidly approaching and I am starting to feel a little under the gun with getting all of my required flying in, specifically getting my solo time to the 10 hour mark.  Earlier in my flying lessons I had great luck with weather, only getting a couple lessons weathered out.  But since my first solo, this luck has started to change as we’ve headed into the Fall season.  The sunsets come earlier which limits my available hours of flying as I work normal weekday hours all week.  Plus, days of low cloud cover or excessive wind days seemed to pop up every time I had a lesson on the books, which made me go from feeling like I was ahead of timeline for my checkride to suddenly feeling like I had to scramble to fit it all in.  My next big thing to cross off my prerequisite list was solo time building and my solo cross countries.  I had to hit 10 hours of solo time as PIC and 5 hours of solo cross-country time before I could complete my checkride so I needed the weather and my schedule to cooperate if it was going to happen on the timeline.

I finally had a good weather day lined up with one of my scheduled lessons and it was going to be the day for my first solo cross country.  My plan was to fly from Flying Cloud (KFCM) to Willmar, MN (KBDH), a quick 73nm jaunt to the West of my home airport and one that I had flown to before on a dual cross country.  My flight was almost over before it even started as I somehow managed to drop the plastic cap off a quart of oil into the engine compartment when I was adding oil. I couldn’t find it in there, and while it probably would not have caused any major issues in flight, I had visions of the cap getting lodged on the exhaust and somehow catching fire in flight.  This would not have been a great outcome for my first solo cross country…  Embarrassed, I finally admitted to the front desk at the flight school what had happened and after some troubleshooting, we were able to get the oil cap out by starting up the engine and letting the propellor blow it out of the engine compartment.  The crisis was averted, but now I had another problem.  My reservation time with the plane was being eaten up by all this messing around with the oil cap.  My calculations showed I would still be able to make it back so the next reservation could start on time, but I would be cutting it closer than I would typically like.

I got up in the air without any issues and had a normal flight over to KBDH.  While this was not my first time flying an airplane solo, it was very refreshing to be cruising with only the hum of the engine at 2,300 RPM and a windshield full of countryside to keep me company.  This flight was a good reminder of one of the reasons I was working towards my PPL; to be able to enjoy being up in the air, see the scenery along the way, and covering ground at a much faster pace (and with a much better view) than I would in a car.  Of course, there were some nerves with managing the airplane for the first time on a cross country, but nice stable air and minimal traffic made for ideal flying conditions which helped calm the nerves.  I landed at KBDH, taxied back for a takeoff, and then headed right back to KFCM.  My reservation time window kept getting tighter and tighter as I was fighting a little more of a headwind than expected on the way back East, but I managed to pull the airplane onto the ramp and shut it down nearly to the minute of the end of my reservation.  The most eventful part of the cross country had been the pre-flight, and I hope I never repeat that boneheaded mistake, but it sure was nice to check one more milestone off the list given my shrinking time window before the checkride.

My second (and final) solo cross country was my 3-leg cross country from Flying Cloud (KFCM) to St. Cloud (KSTC) to Willmar (KBDH).  I needed just under 3 hours of additional solo time to hit my 5-hour requirement, and this flight was expected to be right around the 3 hour mark.  I completed all my flight planning in advance using the paper nav log method that I had learned in the dual cross countries.  I’m sure if I make this flight again as a private pilot in the future I will very likely just plug it into the iPad and use the GPS, but planning via paper nav log was a good exercise as it really forces you to think about waypoints, pilotage, and fuel/time planning in a more detailed way.   The day of the cross country was another nice day, a chilly fall day but it was sunny and the wind was supposed to be relatively calm and the air smooth.   This time I had none of the pre-flight issues that I had on my first solo cross country, so it was just a matter of getting in the air, avoiding mistakes, and enjoying the short flight (50nm) to KSTC for the first leg.  KSTC is a unique airport as it has a control tower (Class D airport), but the control tower doesn’t have radar so relies on pilots for their position calls.  Just one of the quirks you find as you start flying to other airports!  The entry into the airport airspace went smoothly and as far as I could tell I was the only aircraft in the pattern.  It would have been an almost 100% drama free landing except for the hawk that decided to join me on final approach, getting within a few feet of my right wing as I was coming in for landing.  I don’t know what, if any, damage the hawk might have caused had it hit me, but I am more than happy I didn’t find out. I took a nice leisurely flight on to KBDH, did a quick landing and takeoff, and back to KFCM.  I had met my solo cross country requirement of 5 hours, and only needed a little over an hour of additional solo time to meet my final requirement before I was eligible for my checkride.  The schedule was still tight, but having the solo cross countries completed took off a ton of pressure on the timeline.

Around the time of my solo cross countries I was told by CFI Drew that he got the call from the airlines (the “big leagues”) and had to move up his timeline for leaving Inflight to go start his training.  We had both hoped that I would get all the way through my checkride with him as my instructor, but it just wasn’t going to happen.  He felt bad that he was leaving me so close to the checkride, but I absolutely understood his reasoning and wouldn’t have asked him to stay even if I did have some sort of say in the matter!  At this point I had learned everything I needed to learn, so it was just a matter of polishing and prepping for the checkride.  I would just have to do that polishing with other CFI’s at the flight school.   It certainly wasn’t ideal to have to adapt this close to the checkride, but I knew Inflight would put me in good hands.  I did a few mock checkrides with three different instructors over the next couple of weeks.  This gave me the added benefit of having three new sets of eyes on my flying and a couple last minute tips and tricks that could come in handy the day of my checkride.  It was a hectic last couple of weeks leading up to the checkride between mock checkrides in the air, prepping for the oral exam, and making sure nothing was falling through the cracks given my last minute instructor change.  While it was a stressful time, it also meant I was getting that much closer! 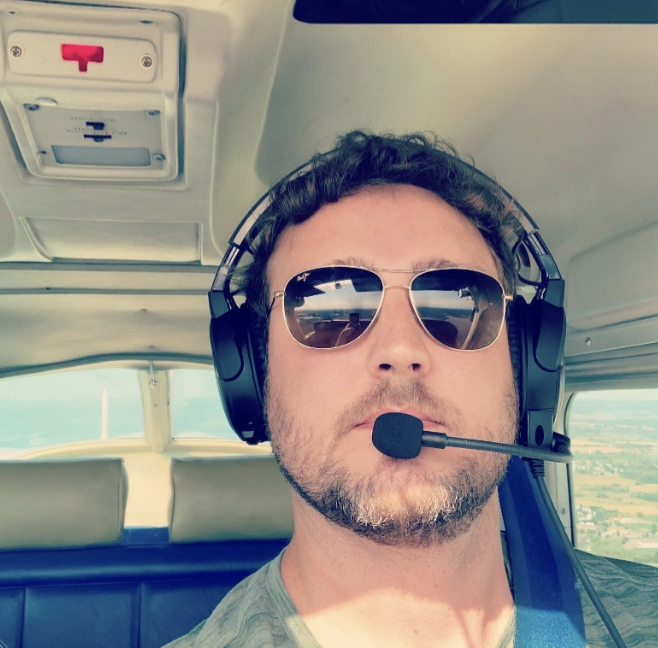 Once all your required hours/flights are complete and your instructor has taught you everything needed to become a private pilot, you will likely transition to checkride prep in the form of mock checkrides.  I did a couple of them before my checkride and they were very helpful in polishing and reviewing:

That does it for blog post #9 of the Inflight Student Pilot Blog. Until next time, live life in the left seat!

Disclaimer: This is a student pilot blog. While I strive for accuracy when communicating concepts or elements from my training, this blog should never be relied on as being 100% accurate.  My experience as a student pilot may also differ from what others experience.  Opinions expressed are my own, and do not reflect opinions of Inflight Pilot Training.