Blog #8: Working on the Night Moves and Written Exam

It is time to change it up and try my hand at some night flying, or as the classic Bob Seger song says time to work on some “night moves”.  His definition of night moves might be a little different from how I’m using it.  Anyway, the requirement for the PPL is 3 hours of night flight time, 10 full stop takeoff and landings at night, and one cross country night flight.  The first lesson CFI Drew and I get acclimated to night flying while staying at the KFCM, practicing flying the pattern and working on takeoff and landings. 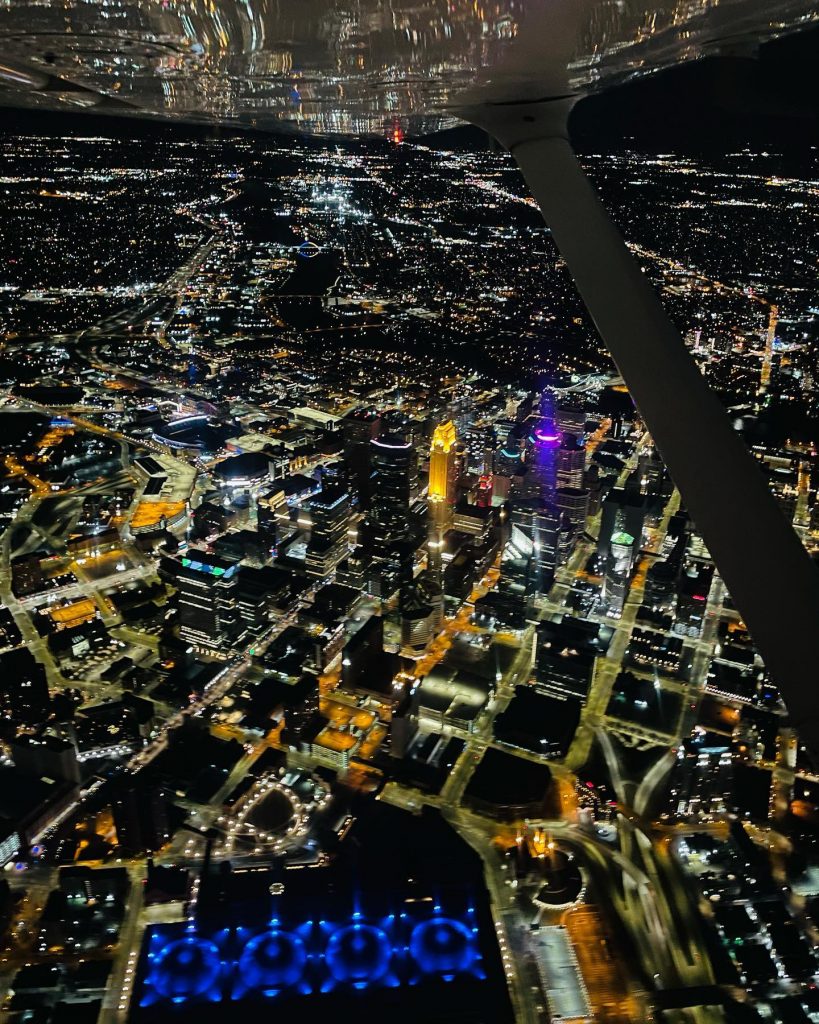 The procedures at night are basically the same as daytime flying, but yet everything still feels very different while night flying.  Night flying really starts well before takeoff as the preparation requires a few differences to protect your eyes to set yourself up for the best possible vision at night. One key to night flight is avoiding bright white lights for 30+ minutes before your flight, as even a quick flash of bright light can impair your ability to see as well as you should at night.  Many people even prefer to pre-flight their airplane with a red headlamp or flashlight as this is less impactful to night vision.  Night landings in theory are really no different than daytime landings, although there are a few key differences that make them harder.

The first difference that CFI Drew pointed out is that when making your turns on base and final as you are approaching to land, the tendency is to stay too high, especially if the ground you are flying over has little lighting, like over water or dense trees.  This tendency to stay high is driven from the fear of crashing, as when you can’t see the ground your brain subconsciously tells you to stay higher to avoid it.  I noticed I was coming in slightly high on final approach on the majority of my night landings, so I was not immune to the brain’s tricks at night.  Although, this got better with practice and by landing number 5 or so it was not an issue.  The other key difference is that judging the roundout and flare is more difficult at night as the sight picture is different than during the day and you typically have fewer peripheral visual cues to judge height above the runway while attempting to flare at the right height.  This can lead to some harder than expected landings until you adjust to the sight picture of landing at night.  As with anything in flying, a little practice goes a long way.

For the second night flight lesson, we completed a cross country to Rochester, MN (KRST).  While there are some extra requirements for night flying that can make it a little intimidating at first, the experience is amazing.  I can see why some people love night flying.  The air is generally calmer at night with little wind or turbulence, there are far fewer airplanes in the sky, and the views are incredible.  The Minneapolis skyline looks infinitely better lit up and night, and even rural areas that seem like an endless tapestry of fields during the day look like Christmas lights scattered across the countryside at night.  I hope to make night flying a regular part of my flying after I get my license, although I hear night flying is frequently one of the first skills a new pilot gets rusty at and quickly uncomfortable with if they don’t make it a regular occurrence.

Plus, living in Minnesota where it gets dark at 5PM for much of the winter makes night flight even more important for a pilot that wants to maximize their time and enjoyment in the air over the winter.   For the night cross country we also practiced using VFR flight following.  Flight following is a procedure for using ATC to assist you on a cross country flight as a second set of eyes.  Once initiated with a simple flight following request, you will be in contact with ATC along your route of flight much like a pilot flying IFR would be.  They key difference is with flight following, it is still the VFR pilot’s responsibility to navigate and avoid traffic.  ATC is solely there during flight following as a resource that may provide you traffic or weather alerts along your intended route, if their workload permits.  Pilots seem to have mixed opinions on flight following from what I gather.  Some prefer to use it on almost every cross-country flight as an extra layer of protection, while others are likely to practice it during their flight training and then never use it again as they view it as an unnecessary hassle.  It is strictly optional to use flight following, but I can see myself using it in some situations going forward.

In addition to the night training, I need to get my PPL written exam out of the way soon so that isn’t a last minute hurdle prior to my checkride.  It is a 60 question, multiple choice test and you are given 2.5 hours to complete the test.  Ask five different people and you will probably get five different pieces of advice on when to take the test in your training.  Some say take it before you even start flight training to get it out of the way, some say take it early in training, and some say take it late in your training, just before the checkride.  There isn’t really a wrong time to take the test as far as I can tell, but to me the way that made the most sense was to take it towards the end of my training.  This was partially due to my personal schedule and my studying availability, but also because I thought it made sense to combine the studying for the written and oral exam as much as possible for efficiency purposes as there are some overlapping topics on both.  The downsides of cutting it this close are of course that if you fail it, it could cause delays in your checkride, plus it adds some extra stress around the time you are really ramping up on your last push to become checkride ready.  The passing threshold for the test is 70%, but I set a personal goal to get above 90% both for myself, and also to demonstrate to my DPE on checkride day that I had a good base of knowledge.

There are rumors that go around that scoring poorly on the written exam can lead to more difficult oral exams.  I don’t know that this is necessarily true in all cases, but I do know that DPE’s are required to address the areas that were answered incorrectly on the PPL written exam, so naturally it is likely to lead to more questions during the oral to cover all those topics if you scored poorly on the written (but still passed).  I primarily used Sporty’s as my ground school through training (supplemented by my CFIs), both using their instructional videos and test bank questions to practice and prepare myself.  There are many test prep solutions available, Sporty’s just happened to be the one recommended to me by Inflight.  About a week before my written exam date, I took the two “FAA practice exams” through the Sporty’s app.  If I scored above the 80% mark on both, a Sporty’s CFI would give me the endorsement to be allowed to take the written exam.  Luckily I passed on both and received my sign off.

For the exam, I was instructed to head to a nondescript office building for the day of my written test.  The FAA outsources their pilot exams to a third-party company so testing sites can be located pretty much anywhere, and not in a government building like I was originally anticipating.  These testing locations are also likely to be testing for a wide variety of things, anything from medical licensing to job placement testing, etc.  So don’t expect to make small talk with a fellow pilot in training in the waiting room before your exam!  However, you might be able to spot them by their E6Bs and plotters as those are allowed to be brought into the exam.  Another good bet is if they are wearing aviator sunglasses and are quoting Top Gun.  Once all checked in at the front desk I was led into the testing center, which was really just a big room full of computers, and I started my exam.  It is a 100% computer based exam, although candidates do get some scratch paper and a chart book to reference.

There were few surprises on the exam as most of the questions I received had been tested in some form during my Sporty’s test prep.  The hardest part about the exam was blocking out the lady next to me that insisted on talking out loud to herself as she answered her questions to a completely different exam.  I guess that is why they allow ear plugs in the testing center, although I did not bring any with me (which might have been a mistake).  I double checked all my answers, submitted my test, and then went back to the waiting room to receive my score.   I was confident I passed, but wasn’t sure if I would quite hit the 90% goal I had set as I was second guessing myself on a few questions.  The test proctor handed me a sheet of paper with my results and I had exceeded my 90%+ goal!  One more thing checked off my list prior to the checkride.

Everyone has a different approach to studying for tests, and my approach is not a one size fits all.  Here are a few of my tips and tricks that could be useful as you approach the written exam:

That does it for blog post #8 of the Inflight Student Pilot Blog. Until next time, live life in the left seat!

Disclaimer: This is a student pilot blog. While I strive for accuracy when communicating concepts or elements from my training, this blog should never be relied on as being 100% accurate.  My experience as a student pilot may also differ from what others experience.  Opinions expressed are my own, and do not reflect opinions of Inflight Pilot Training.