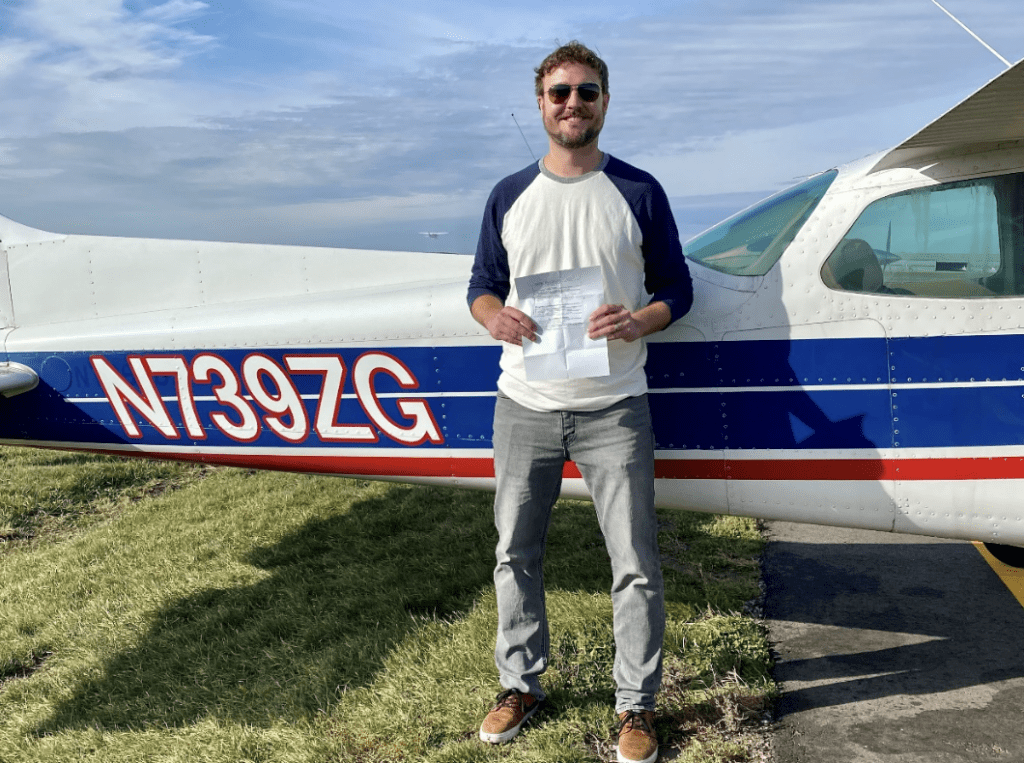 The day is finally here. I have been working towards it for five months and today is the day I finally get to demonstrate my knowledge and flying abilities to a FAA Designate Pilot Examiner (DPE) with the hopes of walking away from today as a newly minted private pilot. The week leading up to the checkride was a stressful one for me. A lot of last-minute studying, a cross country flight plan by hand, and on top of that making sure I have all the required paperwork ticked and tied to be able to start the checkride. I have taken big tests before in my life between college finals and exams for my career, but for some reason I was most on edge leading up to this one. I think part of that for me was that it is a one-on-one, in person test. It isn’t just filling out multiple choice questions or writing an essay, but rather a one-on-one oral interview followed by a demonstration of your practical flying skills. There is nowhere to hide in this type of test and if I wasn’t prepared it would be obvious right away. Luckily I felt prepared thanks to Inflight and my instructors.

My checkride was scheduled at 8:00 AM on an early November Friday morning. I got to the flight school early in order to confirm my plane was ready, plug my flight plan in to the iPad as a backup to my paper copy, and do a last-minute weather check. My weather check the day before the checkride had showed that it was likely to be a marginal weather day for a checkride. Ceilings and visibility weren’t going to be an issue, but the wind was projected to kick up around the time I thought my oral interview would be wrapping up. This added some extra stress as I was going to have to make a weather call on the fly as it was technically “flyable” weather, but definitely not the ideal weather someone would want for their first ever checkride!

After completing my last-minute checks at Inflight, I drove over to my examiner’s hangar where we would do the oral interview. I felt like a pack rat bringing along all my books (FAR/AIM, PHAK, etc), my flight plan, calculator, log books, and all the other documentation I needed from the checkride checklist. Despite my initial nervousness, I was put at ease relatively quickly by my DPE as he had a calm and collected demeanor which made the whole experience more enjoyable. We went over all the ground rules for the test, we chatted for a few minutes, I paid him his fee, and off we went. We covered a wide variety of topics that you would expect to see on a checkride (cross country plan, weather, aircraft systems, regulations, emergencies, aero medical, etc), and as we got going, I gained confidence in my preparation and it started to feel more like a casual conversation between two flying enthusiasts rather than a test. Sure, he was asking me questions and I was required to answer them, but it was much more logic and reasoning based than just testing rote memorization which made it feel much more conversational and dare I say even a little fun! Our time on the oral exam portion was a little over two hours, but the time flew by and if you had asked me how long it took I would have guessed no more than an hour. As we started winding down to the end of the oral exam portion I was confident I was going to pass, but it was reassuring to hear the words come out of the DPE’s mouth that I had passed and would not be required to repeat the oral exam. He then asked me “are we going flying today?”, so I pulled up the updated weather and could see that it was already steady wind in the mid-teens knots range, gusting above 20 knots, and likely to get worse from there. So as much as it pained me to have to put getting my license on hold, I said it would be best to take a weather discontinuance and reschedule for another day. My DPE 100% agreed and he filled out the paperwork for the discontinuance. Provided I could get a plane booked, we were going to reschedule the practical flying portion of the exam for the following Monday. I was relieved to have the oral exam out of the way, but also disappointed to have to stretch this out for a few more days.

Over the weekend I continued to refresh on my maneuvers by reading through the procedures manual and making sure I had committed all the power settings/speeds/tolerances, etc to memory before the flight test. I liked going into the flight test knowing the oral was done so my sole focus could be on getting the plane ready to fly. I again got to Inflight early, about an hour before my scheduled checkride to make sure my plane was pulled out of the hangar and ready to go, plug in my updated mock cross country planning info, and confirm there wasn’t going to be any hiccups. I met with my DPE promptly at 8:00 AM and after a short prelim discussion to review checkride procedures and rules we walked out to the airplane together to start on the pre-flight. My DPE made sure to tell me that outside of instructions and help spotting traffic, he was unlikely to say much during our pre-flight and flight together, and that I should not take this as a bad sign and that his silence probably meant things were going fine. Unless I specifically heard the words stating that I had not met a standard and had failed the checkride, things were likely going ok.

I completed a thorough pre-flight inspection like I had done many times before, although admittedly with a few more nerves this time which led to me fumbling around with a few things at first. Once I got the engine fired up and the plane rolling the nerves started to calm a bit as it felt just like any other flight with one of my instructors. The good thing about training through a respected flight school like Inflight is that they have a deep knowledge of all the local DPE’s and what you can expect on a checkride. This isn’t to say that they know exactly what you will or won’t be asked to do during a checkride by a certain DPE, but they can give you some tips and tricks based on areas where former students may have encountered problems. With the Airman Certification Standards (ACS) now the testing “menu” for a checkride, you know there are some things that will be required. The three takeoff and landings (normal, soft field, and short field), steep turns, ground reference maneuvers, power on & power off stalls, emergency procedures, simulated IMC/unusual attitudes, are going to show up on pretty much every checkride (along with others). My checkride was really no different, I’ll spare the minute-by-minute details. Did I do everything perfectly? No, definitely not. Was I consistently flying the plane to standards identified in the ACS? Yes, I believe was.

I held myself to high standards during my training, and I wanted to do everything perfectly on the checkride, but I was in no way perfect. However, if I did make a mistake, I made it a point to quickly and logically fix the problem so as not to impact the safety of the flight. By the time we were heading back to Flying Cloud, I had not heard the words “you’ve failed” so that I meant I was still on track and just had to hit the short field landing, which I’m told is the top cause of failure on the private pilot checkride. In my training I had been consistently good at short field landings so I could feel my confidence growing as I approached the runway. As I entered the roundout I could feel the plane starting to float a bit more than I wanted and I briefly debated initiating a go-around just to be safe and not miss my spot, but as I was having the split-second debate in my head about what to do, the plane did start to settle towards the runway and I hit my spot within the 200’ allowance (or at least I thought I did). I held my breath for a couple seconds on the landing rollout hoping I was correct and that the DPE agreed that I hit my spot. I never heard “the words” from him so just kept taxiing as normal back to the ramp where went through the post flight checklist and got the plane shut down. We exited the plane and secured it. After exiting I got a somewhat anti-climactic “congratulations, you passed!” from my DPE. No suspenseful reveal of my result. No balloons fell from the sky, there was no confetti, and there were no champagne corks popping on the ramp. Did that matter to me one bit? Absolutely not. I was officially a private pilot and had reached the goal I set out to achieve at my very first lesson five months ago. The pride and feeling of accomplishment was palpable and I had a hard time keeping a smile off my face, just like the feeling of that first solo flight.

My DPE and I debriefed back at the flight school, he completed some paperwork, and he handed me my temporary airman certificate that will make me legal to fly until I get the official one in the mail. The instructors at Inflight were all congratulatory and I took a picture with my certificate in front of my checkride airplane, a picture that I will remember fondly for as long as I call myself a pilot. Hopefully this picture will serve as proof someday to my children that dad was in fact “cool” at some point in his life. From this point on I get to call myself a “pilot” for life, and that sounds pretty “cool” to me.

Student Pilot Tip of the Week: The Checkride

My top tips for day of checkride:

Blog post #10 will be the last “official” post of the Inflight Student Pilot Blog with post #11 a debrief of the experience. Until next time, live life in the left seat!

Disclaimer: This is a student pilot blog. While I strive for accuracy when communicating concepts or elements from my training, this blog should never be relied on as being 100% accurate. My experience as a student pilot may also differ from what others experience. Opinions expressed are my own, and do not reflect opinions of Inflight Pilot Training.