Week #2 is in the books and I am cooking both literally and figuratively in my training.  On the literal side, there has been a heatwave going through Minnesota the last couple of weeks, 90-95+ degree temps with humidity.  While those in Southern states would probably scoff at those temps being called a heatwave, that is plenty hot for us up North on the 45th parallel.  Unfortunately, the Cessna trainer planes have no air conditioning which can make for some sweaty flying after doing a pre-flight in full sun and sitting in the greenhouse sauna that is a single-engine trainer plane for run-up and taxi.  The funny thing is that even though it was so hot, once I got out to the plane there is so much focus on learning and executing what I was learning that the heat starts to become an afterthought.  I guess when you are having fun, externalities like the heat tend not to bother a person.  Once you get up in the air, cracking the window or opening the vents to bring in the 10-15 degree colder air at higher altitudes is a literal breath of fresh air.  Another important concept learned during this heatwave is the impact of temperature on aircraft performance.  In hot conditions, the air is less dense so the plane generates less forward pull from the propeller and less vertical lift from the wings so overall performance suffers.  The Cessna 172 is a far cry from a high-performance aircraft to begin with, so in very hot conditions the climb performance leaves something to be desired but it still gets the job done.

On the figurative side, we have covered a ton of ground in just three short lessons, and I feel like we are really “cooking” through the syllabus.  I am aiming for 2+ lessons a week for the duration of my training, and lessons #2 and #3 were a time to practice and ingrain good habits for climbs, turns, and descents. These lessons also introduced some new maneuvers, including slow flight, power-off stalls, and power-on stalls.  These are some of the maneuvers that I will eventually be required to demonstrate proficiency in with an examiner during my PPL check-ride.  Every maneuver I will be required to do is outlined in a Procedures Manual from Inflight.  This packet gives a detailed description of the steps to set up for, and ultimately complete the maneuver, in addition to the ‘tolerances’ or ‘minimum standards for each maneuver.  For example, the Inflight Procedures Manual outlines the following for slow flight: 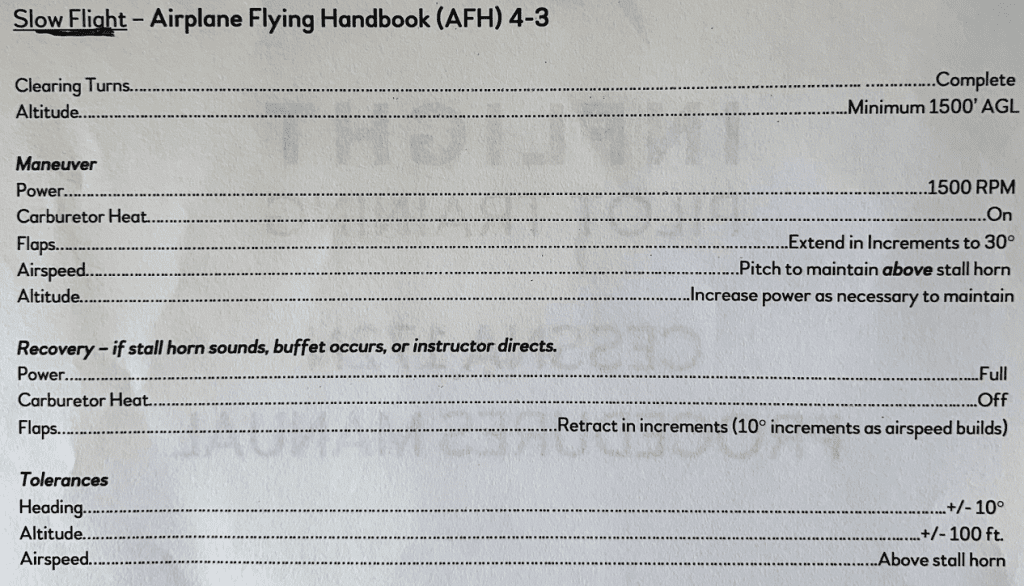 I have found the basic concept behind these maneuvers is really to prepare you for other phases of flight, as well as in some cases pushing the limits of the airplane so as a pilot you really understand where these limits reside for the specific plane you are training in.  If you understand and can demonstrate the limits, you should have success as a pilot staying within those limits (at least I think that is the theory).  Slow flight is rarely a “normal” flying configuration for cruising but is instead used to prepare a student pilot for the landing phase of flight when the airplane will be in a flaps-down configuration and maintaining slow airspeed on final for landing.  Practicing this configuration at a safe altitude is a way for a student pilot to get comfortable with the way an airplane reacts during slow flight.  One of the biggest differences observed between slow flight and normal cruising speed is the lessened response from control surfaces (ailerons, rudder, elevator) in slow flight as less air is moving over the control surfaces so they are not as effective.  In ‘plane English’ (pilot pun alert!), this means at slow flight speeds you have to really move the yoke and rudder pedals aggressively in order to get the plane to respond.  The other big takeaway from slow flight is the concept of ‘pitch for airspeed’ and ‘power for altitude’, again a concept that will be used later for learning the approach to landing.

Stalls were the other big concept introduced during these lessons, and if we’re being honest I kind of enjoyed them.  We all know stalls in flight are not a good thing (unless done on purpose), but I enjoyed learning how to control a plane at and beyond the limit of its “normal” capabilities.  Of course, this is all made me much more comfortable knowing I had an instructor right next to me that could quickly correct any mistakes if my stall recovery didn’t go as planned.  Power-off stalls mimic a stall that might occur when coming in for a landing, while a power-on stall simulates a stall that might occur during take-off or a climb.  Both involve a severe nose-high attitude, pushing the airplane past the stall horn, and waiting for the stall to occur as denoted by a nose or wing drop on one side.  After the stall, the recovery process is used to return the airplane to a safe airspeed and level flight.  Based on my understanding, power-on stalls are typically considered the more dangerous stall as they carry a higher risk of entering a spin.  To its credit, the Cessna 172 is such a stable airplane that its stalls seem relatively benign and you really see how far you have to push the plane to even get into a stall in the first place.  While I do not have direct experience with stalls in other planes, I am told most are not as forgiving as a 172 when it comes to stalls!

Amazingly after only three lessons, we have covered about 75% of the maneuvers that I will need to demonstrate on my check ride.  I have a long way to go to perfect them all (as well as a ton of other things to learn), but now that I have done them I understand what is required of me and am gaining confidence in my skills as a pilot in training.  I am happy with my progress so far, and I look forward to the next lessons!

I have tried to prepare for my lessons ahead of time, and I would suggest this to any student pilot.  While not a requirement, it makes lessons more efficient as I have a broad understanding of what we will cover in the coming lesson.  We all know that in-flight training, efficiency not only means efficiency of time but also money.  Every extra minute in the plane or with an instructor reviewing on the ground adds to the final cost of earning your PPL. Here are a few tips that I’ve found useful as I prep for lessons:

This does it for week #2 of the Inflight Student Pilot Blog. Until next week, live life in the left seat!

Disclaimer: This is a student pilot blog. While I strive for accuracy when communicating concepts or elements from my training, this blog should never be relied on as being 100% accurate.  My experience as a student pilot may also differ from what others experience.  Opinions expressed are my own and do not reflect opinions of Inflight Pilot Training.