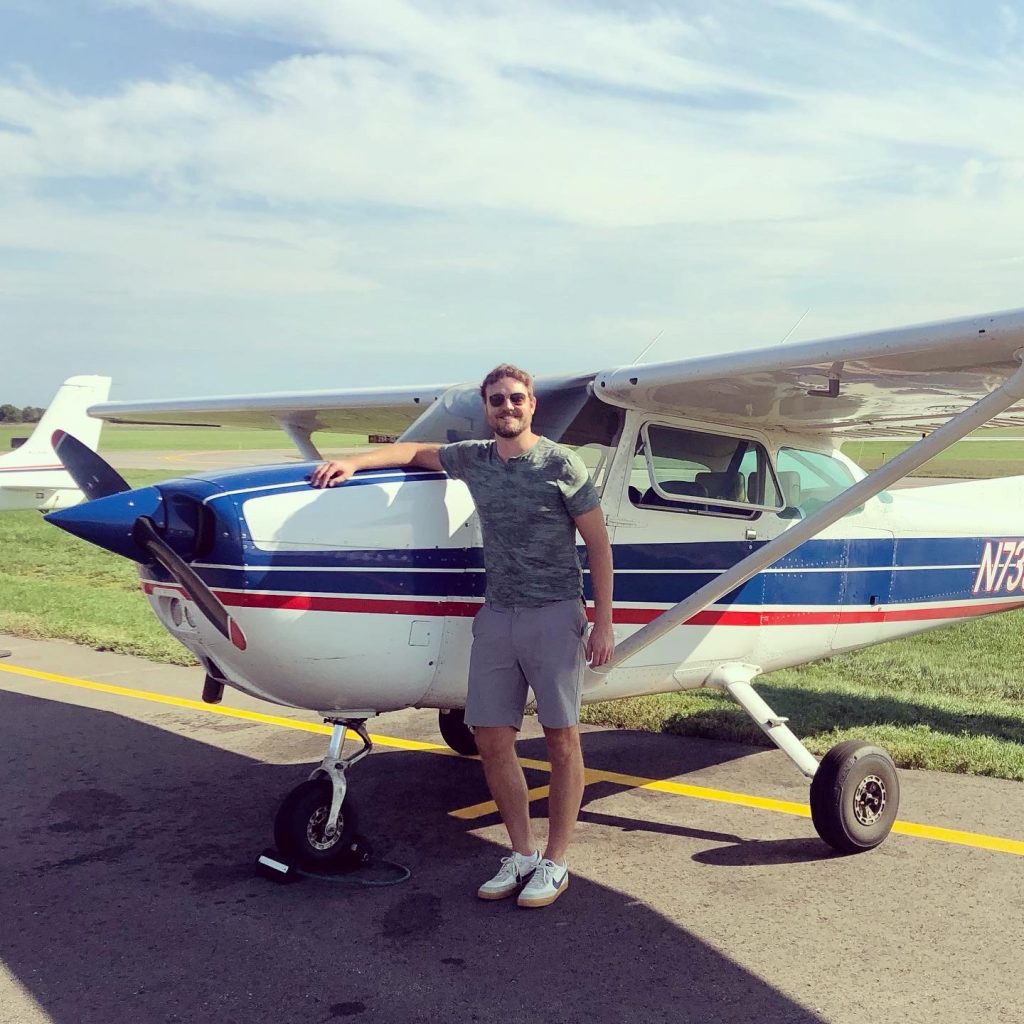 I knew I was getting close.  My landings were consistently safe, I had completed the required pre-solo written quiz, and I was becoming more capable as an independent pilot, and the next big requirement in my training was to start building solo time.  After a lesson one day, CFI Drew took my logbook and completed the required CFI endorsements for solo flight.  I was officially legal to fly an airplane on my own with no instructor, which felt like a big accomplishment, but at the same time didn’t mean much until I actually did complete that first solo flight.  So at the next lesson, I fully expected that if the weather cooperated at some point I would be flying the airplane all on my own.  CFI Drew and I flew to nearby Buffalo Muni (KCFE) on a Sunday afternoon, the weather was looking promising for solo so that was a good start.  However, I knew that if I was having an off day with my landings or for whatever reason was making mistakes, that my chance to solo may not materialize so there was a little bit of extra pressure to make sure I was at my best.  We completed several laps in the pattern as a warm-up, and my landings were generally going fine.  I wasn’t greasing them all, but they were safe and acceptably gentle on the touchdown so off to a decent start.  Then, on one of my landings, I was within a few feet of touching down for what I thought was going to be a fairly good landing when CFI Drew abruptly called for a go-around.  I crammed in full power and executed the go around as prescribed, but my heart sank for a minute as I wondered what I did wrong that required a go-around.  I wondered if I had just blown my chance at soloing that day by doing something incorrectly that required a go-around, or just as bad, not calling my own go-around if the landing was going to potentially be unsafe.  Luckily, CFI Drew explained this was just one last surprise test to make sure I could still properly execute a go-around in case I needed to do one when I was flying solo.  We did one more lap in the pattern and I completed a so-so landing.

After that landing, CFI Drew asked me to taxi off the runway.  Once we got to the taxiway, he gave me a few last-minute reminders and words of wisdom and then like a mother bird, exited the airplane and left me alone to take flight alone for the first time.  There was a slight sense of nervousness as I taxied back to the runway, but it paled in comparison to the feeling of excitement as I had confidence in my ability to fly the plane and knew that CFI Drew never would have let me solo without full trust I would be able to do it.  I made my radio call, eased out on the runway, and pushed in the throttle to full power for takeoff.  Up to this point, I had done countless takeoffs in my training, but once the wheels lifted off the ground without anyone else in the cockpit there was a feeling of euphoria unlike any other so far in my training.  I was flying solo and the feeling was indescribable. The euphoria was quickly subdued as I got into the pattern and started to focus on setting myself up for landing.  The solo takeoff was the easy part, now came the harder first solo landing.  I set myself up on a nice stable approach, focused on my aiming point, and reminded myself that with less weight in the airplane I was likely to float more than I was used to during the flare.  The round out and flare went as planned, and I gently eased the wheels on the ground like I had done so many times before.  Was it my best landing ever?  No, it wasn’t, but it was a fine landing and I was on the ground and had successfully completed the first lap in the pattern without any help.  CFI Drew gave me a few air fist pumps in excitement as I taxied by him and he motioned for me to keep going.

I completed two more laps in the pattern with generally uneventful takeoff and landings, just how I wanted them to be.  After the 3rd lap I swung over to pick up Drew and away we flew back to the home base. I had a hard time keeping the grin off my face during the flight home after that first solo.  Once we landed we snapped a quick picture to commemorate the day and CFI Drew sent me the video he took of my first takeoff and landing.  I also got an Inflight t-shirt, which was a nice touch that will jog my memory of that first solo every time I wear it.  CFI Drew was feeling a little nostalgic about my solo as well, as he also recently told me that he will be joining a regional airline in the near future.  So assuming nothing major happens, I might have been his last first solo as a flight instructor!  I shared the news of my first solo with my wife and family when I got home, and they were very excited for me accomplishing one of the major checkpoints in flight training.  While completing the first solo does not make a person an officially licensed pilot, it really was the first time I felt like I could call myself a pilot and mean it.   Now I just need to keep my foot on the gas and make it official!

Student Pilot Tip of the Week: Getting to the First Solo

Completing the first solo flight is a major training milestone and one that is not taken lightly by CFI’s.  By allowing a student to solo, they are putting not only the student pilot’s skills to the test, but also putting their own job and reputation on the line as the student pilot is still the CFI’s responsibility even when they are flying solo.  That is why a CFI needs to have complete confidence in their student before sending them on that first solo.  Here are a few tips that may help you build confidence with your CFI that you are ready to solo:

That does it for blog post #7 of the Inflight Student Pilot Blog. Until next time, live life in the left seat!

Disclaimer: This is a student pilot blog. While I strive for accuracy when communicating concepts or elements from my training, this blog should never be relied on as being 100% accurate.  My experience as a student pilot may also differ from what others experience.  Opinions expressed are my own and do not reflect opinions of Inflight Pilot Training.