For as long as myself Jason can remember, I’ve always wished to fly.  It had been a dream of my childhood and I looked up to my uncle, at the time a 757 Captain for Northwest Airlines.  In High School, I knew I would find a way into becoming an aviator and I investigated several colleges and universities for programs ranging from Commercial to Missions aviation.  I settled on Commercial Aviation with the University of North Dakota and in August of 2001 I moved in and began my initial classes for the program. And then September 11th came, and we found ourselves wondering where the industry would find itself.  Coming from a family with little money and staring at tens of thousands of dollars in potential loans while on the cusp of an industry collapse, I finished out the 2001-2002 school year without so much as looking at a plane and dropped out of the program and school.

The dream never died, however.

A year later, I was enlisted in the U.S. Army as a 15B: Aircraft Powerplant Repairer.  I became a turbine engine guy and spent the following six years learning every aspect I could of the UH-60, AH-65, CH-47 and OH-58 aircraft in the Army inventory.  When I left active service in the fall of 2009, I had received my A&P License off of sheer experience alone…but I’d still never actually learned to fly.  The dream of being a pilot, while not forgotten entirely, had long since faded from my mind. I was hired on at Delta Air Lines in the Winter of 2010 to fix tray tables and seats but have since moved on to work the flight line and then shifted into our local maintenance planning organization.  In the present, I’m still with Delta as a Lead, guiding the workflow of our aircraft checks.  I am father of two amazing, cheerful and energetic young boys, and am husband to a brilliant, encouraging and lovely wife.  And it is to her in particular whom I owe the resurrection of The Dream.

It was AMT Day 2019 when Inflight was invited to our hangars, bringing a Cirrus and a 172 as static displays.  I talked for a bit, pined a bit and ultimately took the info package home, despite my assumptions that It Would Never Happen.  A few days later at dinner, I mentioned it to my wife, and then dismissed it out of hand as silly.  I can’t remember the exact words anymore, but the conversation ended with me overwhelmed in emotion and tears; my wife, the splendid woman that she is, had asked ‘why not’ and said we could go ahead and do this.  That she would support me and we’d make the funds available.  Her family joined in support as well, buying me a kneeboard and headset for Christmas and telling me how excited they were for me to pursue this.  Her aunt, a private pilot as well, encouraged me in this pursuit.  My uncle, my childhood hero, also cheered me on and a good friend of mine who flies for Endeavor showed up one day to lend me all his textbooks from when he learned to fly to help start me studying. 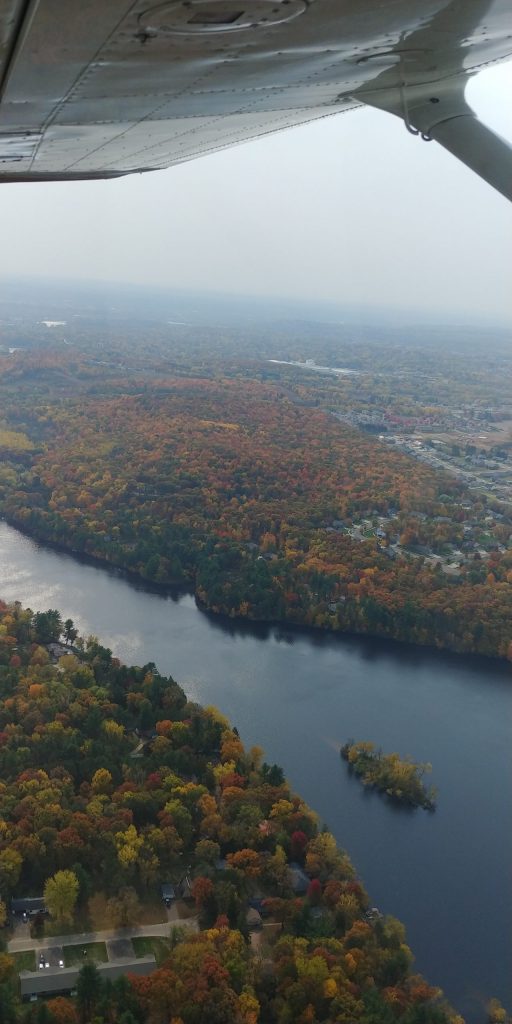 By February of 2020, Delta had distributed record profit sharing and I was looking at purchasing a 172 with two of my coworkers to train in.  I had researched schools and looked at CFIs for hire and was getting ready to pull the trigger when we finally found The Plane.  Unfortunately for us, 2020 had other plans and come May one partner was looking at early retirement, the other was out, and I found myself puttering around the house on a voluntary leave of absence from Delta.  Tired of seeing me discouraged by current events and excited to take advantage of the extra free time, my ever gracious and encouraging wife told me to go learn to fly. After the rigorous process of selecting a CFI by picking the one who shares my youngest son’s name and had early morning availability, I began flying with Colin Hernon on the 18th of May.  The selection methodology was effective, and Colin is an outstanding and proficient instructor with whom it was a pleasure to learn from.  In spite of Corona, in spite of weather, in spite of everything, Colin and later on Drew taught me to fly.  Even in July-August, when I never thought I’d figure out landings (much less solo), they helped me to persevere and my solo flight at KLVN occurred on August 30th.   And finally, on November 4th I tested for and received my Private Pilot’s License.

While my flying career has been (quite) short, I’ve had plenty of opportunity to have fun both in training and as a private pilot.  For example, last month I had the pleasure of taking my wife to visit her sister’s family in Eau Claire aboard N739BN.   The flight out was fairly busy as I chose to skirt under the Bravo instead of hoping for a clearance for a more direct route, and the strong tailwind got us out there quickly.  In hindsight, maybe flight following would have been a good idea—the skies were quite busy southeast of the metro and the workload and stress of keeping track of all that traffic made it less than relaxing, but still fun for my wife to be up front next to me for the first time. After taxing into the FBO at KEAU, I took the family up in two trips, letting them get a taste of general aviation flying and even a bit of night flight.  After a delightful dinner with them, we went back to the airport and had a quite leisurely trip back to KFCM (courtesy of that wonderful tailwind becoming a fierce headwind), arriving after the tower had closed.  Again, we kept outside the Bravo, and got to enjoy the myriad of Christmas light displays of the south metro from the air.

Unfortunately upon arrival at KFCM a windshear situation had developed.  At pattern altitude (1900 feet, we’ll call it) wind was coming strong out of the south-southwest, meanwhile the AWOS was reporting winds 230@8 on the ground.   Initially, since I was entirely alone in the air around the airport, I called for a left Base entry for 28R but I soon realized I would have to crab and slip hard to actually stay on course for the runway.  My wife found flying north while pointing west to be a bit unsettling, and I can’t say as I blame her, I was a bit unsettled myself.  Thanks to Colin’s hard work to instill solid ADM into me, however, my mind stayed clear and I called a switch to runway 18.  The crosswind component on the ground would be the same as 28R and the slip required to stay on course would be much gentler and once I broke through the wind layer it would require less correction to make the runway.

I’d be a liar if I said I didn’t let out a whoop of joy and satisfaction when 9BN’s wheels gently kissed the pavement of 18.  While the exam ride on November 4th said I had developed the knowledge and skills needed to safely operate a plane, this flight proved to me that I am now a pilot and The Dream has finally been achieved.  If you’re reading this and thinking about getting into flying, or perhaps already are in the midst of learning, please allow me to encourage you.  If this has been a dream, don’t let it die.  Embrace it and make the most of it you can.  And when the training is going rough, the instructor isn’t available, landings are absolute garbage, or the weather seems like it’s never going to actually clear up, don’t be discouraged.  It will get better, so long as you stick with it.  If you make a mistake, as Colin likes to say, see it, acknowledge it, fix it. And if you find yourself feeling fear know it’s only normal.  Use it to keep you making clear, safe decisions and don’t allow it to lock you up.

Learning to fly was an adventure in and of itself.  And it opens up so many more skies of adventure.