The VFR Training Maneuvers series is a multi-article series focused on the primary flight maneuvers taught during the Private Pilot syllabus. These maneuvers consist of slow flight, stalls, steep turns, and ground reference maneuvers. We will break down what these maneuvers are, why we fly them, why these skills are essential, and how we fly them. We will also include a few tips and tricks to help increase your airmanship. The first maneuver introduced to pilots after they have a grasp on the basics (turns, climbs, descents, etc.) is slow flight. Many pilots remember slow flight being the maneuver early on in training that really put their hand-eye coordination to the test.

What really is slow flight?

The FAA defines slow flight as “when the airplane’s angle of attack (AOA) is just under the AOA which will cause an aerodynamic buffet or a warning from a stall warning device if equipped with one” (AFH 4-3). Great, thanks FAA, but what does this really mean? In practical terms, slow flight means that we are flying the airplane at a slow airspeed with a high power setting, in, generally, a “dirty” or “landing” configuration. This means we have flaps extended, and gear, if you’re doing training in our Piper Arrow, extended. We know we are in slow flight when we are established at an airspeed at which any further increase in AOA, increase in load factor (as a result of a turn), or reduction in power, will result in a stall warning. We find this airspeed by slowing the airplane down until we hear the stall warning horn, or feel the airplane buffett, and then increasing our airspeed by 5-10 knots. You may have heard about slow flight being referred to as the “region of reverse command” or the “backside of the power curve”, but to most student pilots early on these words sound like a foreign language. The reason this is called the “region of reverse command” is because in normal cruise flight we would use pitch to maintain altitude and adjust the power setting to increase or decrease our airspeed. However, during slow flight we do the opposite. We use pitch to manage our airspeed and power to manage our altitude. The reason behind this, which we will discuss more in depth later on, is due to the induced drag created by a high AOA. The induced drag drastically increases as the AOA of the airplane increases to maintain lift, which rapidly decreases airspeed. The reasoning behind the term the “backside of the power curve”, is that each RPM setting has 2 airspeeds it correlates to, which you can see from PHAK Figure 11-14 (hence the backside, or left side, of the “power required” curve). Even though we may be at the same RPM setting we are at during cruise flight, our airspeed is significantly slower. In some cases, depending on how strong the winds are, it is possible to be going slow enough that the airplane is actually stopped or even possibly moving backwards over the ground. 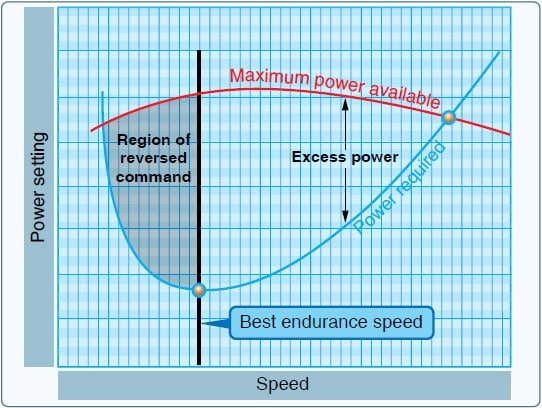 Why do we do slow flight?

The million dollar question asked by almost every student pilot. The FAA’s definition as to why we practice slow flight is so that we can “understand the flight characteristics and how the airplane’s flight controls feel near its aerodynamic buffet or stall warning” (AFH 4-3). In reality, the truth behind doing slow flight is so that we are able to understand how the aircraft responds during high drag, slow airspeed configurations (hint hint..approach to landing), as well as learning how to maintain coordination in various flight configurations. As pilots, we need to have certain muscle memory and knowledge ingrained into us so that if we find ourselves low and slow on final approach we don’t try to solely pitch up to regain our altitude, which would result in a drastic decrease of airspeed and potentially an unrecoverable stall close to the ground. Instead, we learn from doing slow flight that if we are low we will need to add power, not solely pitch up, which is the opposite of what our normal human instincts tell us we should do.

Why are these skills important?

Outside of flight training we are generally not cruising around in these high drag, slow airspeed conditions, however, every pilot will see them during all phases of the traffic pattern, but especially during approach and landing. We know that during these phases of flight we are close to the ground, at a slow airspeed, making shallow-medium banked turns, and are configuring for landing, all while managing power settings, radio communications, and looking for traffic. Talk about a lot going on that close to the ground! The last thing we want to do is let our airspeed or our coordination get away from us. We also know that to complete a successful lap in the traffic pattern we need to make 4 turns. If we are unaware of how to perform coordinated turns while maintaining sufficient airspeed, we increase our chances of a stall/spin. Unless you are performing certain flight training maneuvers, a spin, defined as “an aggravated stall as a result of uncoordination”, is most likely to happen during the Base-to-Final turn in the traffic pattern. Stall/spin accidents in the traffic pattern have a fatality rate of almost 30%. I don’t say this as a scare tactic, but more so as a reinforcement as to the importance behind knowing, understanding, and being proficient with slow flight.

How do we perform slow flight?

The procedures vary by airplane, however there are some common themes amongst all of them when setting up and performing for slow flight. Here at Inflight we currently provide you with the opportunity to fly 4 different types of aircraft – Cessna 152, Cessna 172N, Piper Arrow IV, and the Cirrus SR series (SR20, SR22, and SR22GTS). Our procedure manuals for each aircraft, which can be found under the “Resources” tab on our website, list the steps on how to perform the maneuver.

Tips and Tricks to Improve Airmanship