My name is Cory Knudtson, and I have always been curious about planes, flying, and aviation in general since a young age.  For reasons that are unimportant, though, I never really pursued my curiosity for aviation much as a young adult.  Instead, I became a public school teacher and then graduated from law school. Things changed a bit for me in 2012.  While on Winter break, I discovered I had a lump in my neck.  Long story short, I spent a couple of weeks knowing I had a tumor in my neck and jaw, but I didn’t know if it was cancer or not.  Luckily, it wasn’t cancer, so after the tumor was removed, I reflected on what I still wanted to do with my life.

At 33, I (Cory) decided to take the plunge and become a private pilot.  After my health scare, I realized that there were no promises of tomorrow.  I had taken a discovery flight about 2010, but the vibe at that school didn’t fit me.  In April of 2012 I went for another discovery flight with Trever Rossini who at that time had just taken over Inflight and owned all of 2 planes. My experience while flight training with Trever felt right from the start.  I mean, he had attended the school I taught at back then, and he came highly recommended by his former teachers.  He had an intuitive way of knowing when I needed to be pushed and knowing when I needed time to reflect and an encouraging word.

What did you enjoy most about your training?

I can’t say my training was easy.  The choice to become a pilot is a task that requires time, effort, and a sense of adventure (as well as a willingness to explore areas outside your comfort zone).  But, it is a choice that paid off.  I’ll get to the flying part later, but the best part of becoming a pilot is the sense of confidence I gained in my life.  I spent many hours studying books, watching YouTube videos, sitting at Inflight, and even sitting in planes on the ramp trying to figure out what in heck was VOR tracking (what happens when you are reverse sensing…why?!).  One particular day, just before I (Cory) was to solo, Trever said to me, “Cory, you are in charge, and I am not going to say a word.”  Good to his statement, after an hour or so of being in the pattern with “silent Trever,” I realized that being a pilot is actually like this.  You are the one who makes the choices, and you have to make the determinations that matter to your flight.  Good pilot decision making is what makes good pilots great pilots.  While I was annoyed with my instructor at the time, years later I have truly appreciated these moments as they’ve helped me understand flying and even life. In September of 2012, I took my oral and flight test.  I’d love to tell you I passed on the first try.  I didn’t.  My landings and a hot humid day made it tough.  At that time, I really did want to give up, but the crew at Inflight (I’d flown with all the instructors at that point in my training), wouldn’t let me give up.  3 weeks after missing some landings, I stuck all 3 required landings like a pro.  When I finished, Trever simply told the examiner, “he knew how to do it the whole time.” 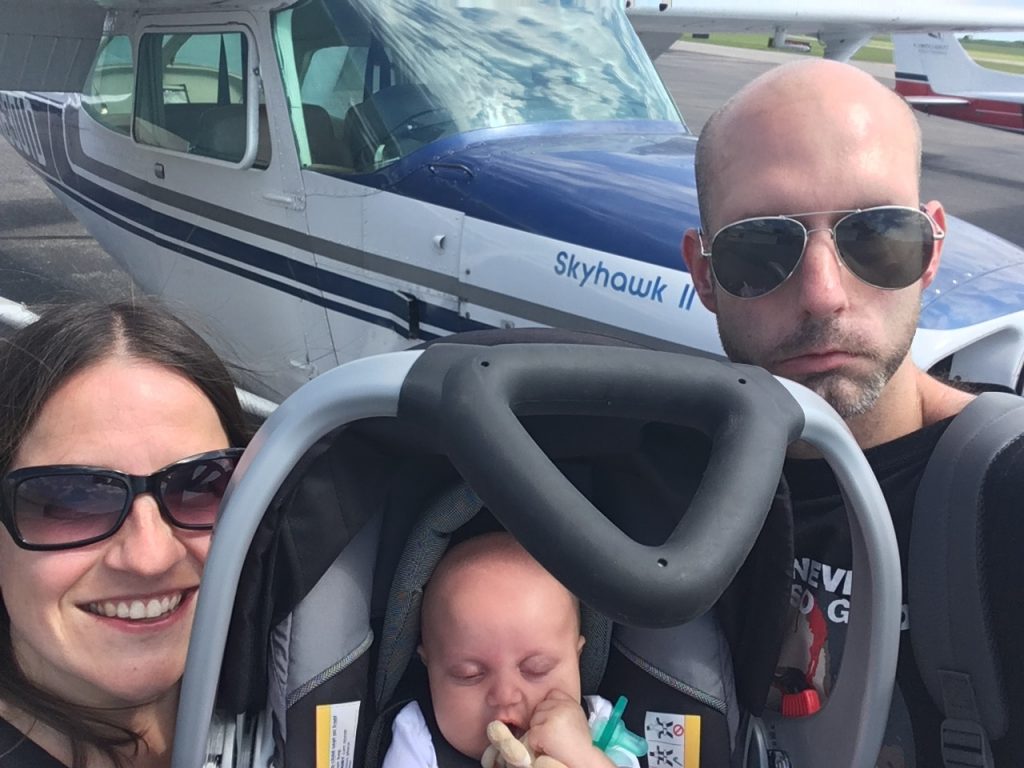 What are some of your favorite memories at Inflight?

After flying around a bit, mostly in the Midwest, I met the lady that changed me again.  In 2015, I met my now wife.  On one of our early dates, we went up in 3TP (if I recall correctly).  We tooled around the local skies seeing the local sights.  I won’t lie, she was a bit nervous at first, but we made it down safely, and she said she enjoyed the flight. I told her that was nothing, that night flying was the best (and, it is by the way breath taking!)  In any case, despite attempts to fly at night, weather and then life happened.  The ongoing joke in our relationship was that when I did take her night flying, she would dump me afterwards.  About a year after our first flight, I got to take her up in 9GT at night. It was a great flight!  Despite being in winter, the night was warmish, and the skies were clear.  While flying over Lake Waconia, I asked my wife to grab my E6B computer from my back.  When she pulled out the small black box, I asked her to open it and pull it out.  When she pulled out the “computer” she found an engagement ring.  I asked her to marry me in 9GT over Lake Waconia at night. 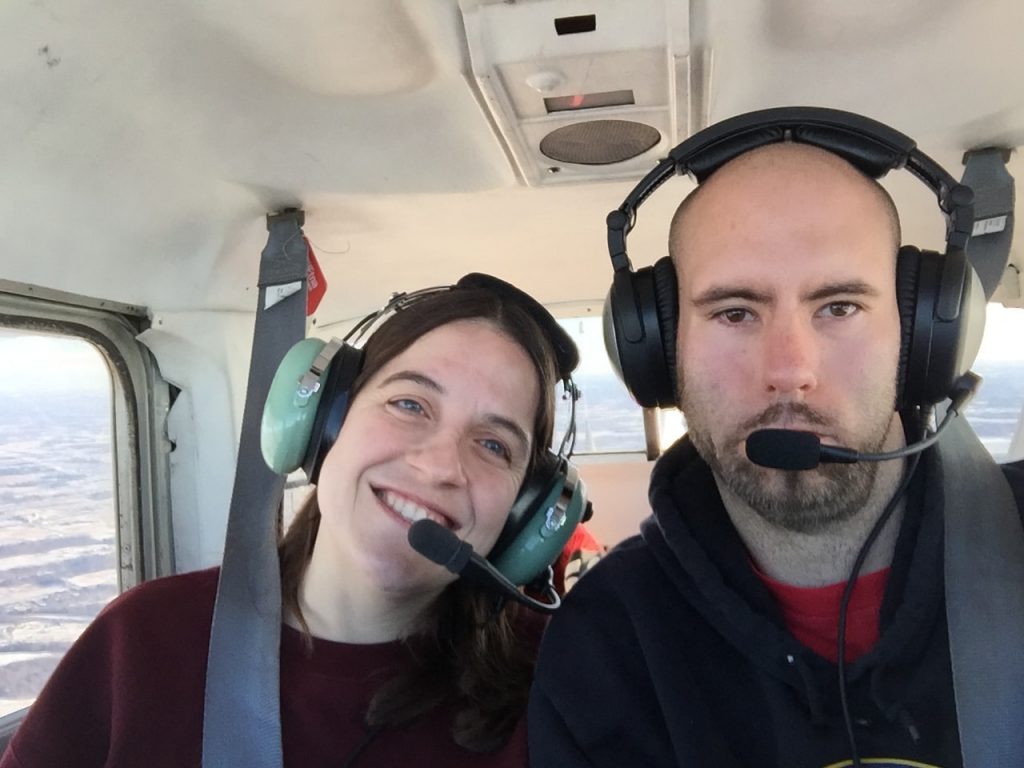 My wife is a very smart, kind person.  But, she must have been feeling queasy because she said yes!  When we approached Flying Cloud, the first person we told was the air traffic controller working the tower that night.  It was pretty epic! A few months later, my fiancé became my wife.  After I got married, my wife and agreed to let me start working on my instrument rating.  Again, I spent many hours of the 2017 summer studying, flying, learning, and reading all about instrument flying.  This was a grueling rating, but the instructors I had really connected with me.  And, whenever I had any issues that Steve couldn’t help me with, I always could shoot questions to Trever. While my check ride lasted weeks (due to weather).  I passed that one of the first try.  At the same time, I got to share with Trever and the Inflight crew we were expecting our first child!  As the picture below shows, we celebrated with pumpkin carvings! 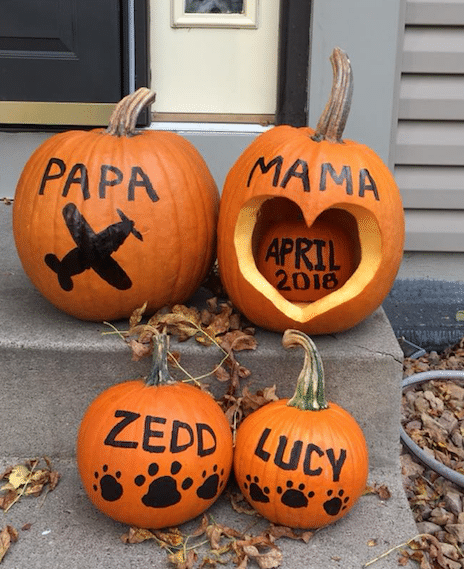 My favorite flight, aside from the proposal, was when I (Cory) got to take Allie, my daughter and my wife flying as a family for the first time.  This was a great moment for me!  These days, any time Allie sees an airplane in the sky, she’ll call out “airpwane.”  I think she is a pilot in the making!! I don’t say this lightly, but I truly love Inflight.  While they have changed drastically since I started, I have seen the passion in aviation and more importantly passion for teaching about aviation to people who have anything from a curiosity about aviation to a life long passion.  Inflight has invited my wife and children to fly to new adventures and new places.   Because of Inflight’s passion, I have also invited other family members, friends, students, and acquaintances to fly the blue skies with me (and sometimes a cloudy one J).

Any advice for those who are looking to get their Pilot License?

While flying planes started as a curiosity, it has become a true passion for me.  I’ve met so many fun, enjoyable people flying around.  The memories I have made flying has been unimaginable from when I first contemplated getting my license merely 5 years ago.  It hasn’t always been easy, and I have made many mistakes flying and in life.  But, I have never once looked back at my decision to fly with regret.  It is part of who I am. I give you two pieces of advice if you are considering getting your license.  First, ask yourself if you are ready to never stop learning and having a blast doing it (most of the time…).  And second, fly with different instructors and schools to find what fits you.  While I (Cory) swear by my experiences, you have to find your own Victor Airway!